Bay View Funding is starting a Penny War – Find Out Why!

The month of February will see the employees of invoice factoring company Bay View Funding in a war involving pennies! However, in this ‘war’ everyone wins, with the proceeds going to the American Cancer Society. 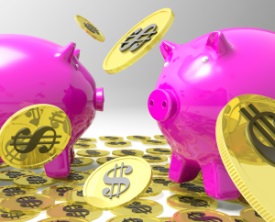 The Penny War is becoming an annual tradition at Bay View Funding! This friendly rivalry between office mates is all about raising money for charity. Last year close to $1000 was raised for the American Cancer Society. There are high hopes that the amount raised will increase this year, considering the level of office competition. When they are not busy financing accounts receivables for their customers, employees will be putting their spare pennies to war!

Let’s start by explaining the penny war game. The objective is for each team to collect as many pennies as possible during the ’war’ while simultaneously ‘sabotaging’ the other teams involved. Team members bring pennies to the office and put them into their team container. Their team receives one point for every penny collected. Add a slight twist to the mix and then comes the opportunity to strategize!

One team may sabotage another team by putting ‘silver’ coins (nickels, dimes, and quarters) or dollar bills into the containers of the other teams. Each silver coin or dollar subtracts points from that container by the value of the coin. A nickel subtracts 5 points from the total; a dime reduces it by 10, and a quarter by 25, and a dollar bill by 100. The strategies employed by each team add to the fun.

Fun inter-office challenges are a great way of building office camaraderie while raising money for the charity of your choice. There is nothing like a bit of healthy competition to encourage each team player to up the ante on the other teams involved. In this case more competition means more cash raised to help beat cancer!

We will keep you posted on our Twitter feed @BayViewFunding. Our Penny War ends on the 28th of February when we will be excited to share the final amount raised.