2015 is looking good for business! The U.S. economy is demonstrating the ability to drive global growth in 2015. According to an article in CNBC.com, while America’s economy is on the rise, the news has not been so rosy for other global economies. Let’s take a look at what the figures are indicating for 2015, both in America and overseas. 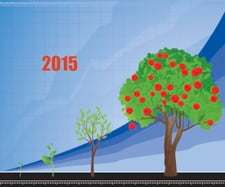 The good news for the New Year is that the acceleration of U.S. growth is a key reason that the global economy is also expected to grow faster, at about 3 percent, up from 2.5 percent in 2014, according to economists at JPMorgan Chase and IHS Global Insight.

Kiplinger’s economic outlook suggests an increase in GDP of 3% in 2015 after a fourth quarter pause at 2% in 2014. Kiplinger sees plenty of positives on the horizon, with similar reasons behind the economic upturn in 2014.

An article in Businessweek, written by Peter Coy, suggests that whether you are a small business owner, or the CEO of a multinational organization, it is important to understand where the opportunities lie, as well as the dangers in 2015. The global economy plays a big role in the economic future for businesses in America, and Businessweek provides a useful map of global GDP at a glance:

In terms of the U.S., the article suggests that the most critical unknown when it comes to forecasting for 2015 is if the Federal Reserve begins to raise the federal funds rate. Since the end of 2008, it has been locked at zero to 0.25 percent. This was supposed to be an emergency measure during the financial crisis. Any federal increase could affect growth, inflation and exchange rates around the world.

In conclusion, economic factors around the world will most certainly affect the U.S. economy for the coming year, but America is continuing to drive positive growth, and businesses should look to capitalize on the economic upturn.