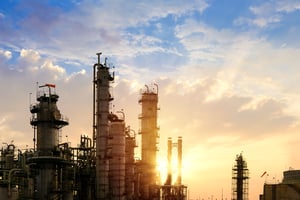 Among the many impactful factors, the oil and gas industry is heavily dependent on the economic climate. As one of the leading indicators of global economy and relations, it is also one of the mostly closely watched and hotly debated. Knowing where the industry is headed can help businesses make informed decisions about an industry that is historically volatile and forever changing.

Is It Time to Diversify?

Three main trends in the oil and gas industry have led to a climate of “shifting sands:” rapid changes in commodity price, ambiguity surrounding the future of fossil fuels due to increasing global regulation, and contentious trade wars around the globe turning supply and demand fundamentals on their head. Leaders in the oil and gas industry are trying to find secure footing in an evolving landscape, which can make it difficult to ascertain a growth strategy.

There is no doubt that the demand for oil and gas are projected to decrease; increased urgency to switch to renewable energy have led to an era of increased regulation globally, which will pressure oil and gas leaders to make strategic decisions about the future.

Despite a public interest in reducing the reliance on gas, the numbers show a different story. Even amid talks of a low-carbon future, the International Energy Agency projects that fossil fuels will still account for around 75% of global primary energy demand in 2040. Oil and gas demand is expected to decrease nominally, from 32% to 28% and 25% to 22%, respectively.

Despite industry projections, the sense of urgency surrounding carbon use will continue to alter consumer attitudes and governmental policies. As such, oil and gas companies have an opportunity to make important strategic decisions that will allow them to stay competitive amid an industry climate that is seeing unprecedented change. Executives have three main options:

Which pathway is best? There is no one answer; not all oil and gas companies are equal. Some are naturally more agile than others thanks to revenue streams and cash flow. When making any investment decision, weigh inherent risk and reward. For the oil and gas industry, this occurs on a larger scale, not only because of the amount of revenue involved, but because of its inextricable link to the international economy. Sanctions and political uncertainty will continue to be influential trends in the final quarters of 2019 and into 2020.

Bay View Funding offers reliable financing for the oil and gas industry no matter the political or economic climate. To learn more about the invoice factoring process, contact us.

Topics: Financing for the Oil and Gas industry, Invoice factoring